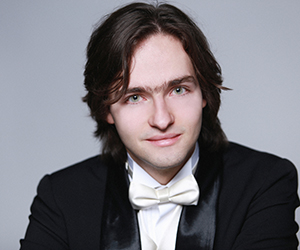 Arseny Tarasevich-Nikolaev, born in Moscow on February 21, 1993, comes of a family of musicians. Graduated with honors from Central Musical School of the Moscow Conservatory, where he studied with professor Alexander Mndoyants in 2000-2011.

In his early childhood he already performed a lot on stage, starting from the age of 4. At 9 he had his debut with the Bryansk Philharmonic Orchestra (Bach, concerto f-moll). During his school years Arseny has won 5 international youth piano competitions, including the New Names Competition in Moscow.

Very soon, being the student of the 1st course, Arseny marked 2012 by an outstanding victory in the V International Scriabin Piano Competition (Moscow, June).

In August 2013 Arseny received II prize and special prize for the performance of Russian music at the Cleveland International Piano Competition.

Some of the press reviews in different countries:

«…His performance was skillfully controlled and masterful, his tone rich and dark…

…He’s one of few players who can draw fortissimos from the piano that have solidity and weight without harshness… wears his formidable technique lightly and isn’t afraid to lead off with subdued repertoire that sneaks up on you before he unleashes his full interpretational power…» Cleveland Classical, USA

«Stunning technique, transparency of the sound palette, the ability to « sing » on the piano … the exact understanding of style…» Musical life, Russia