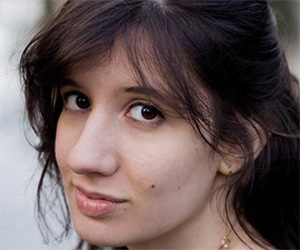 Described by the French press as a pianist with « a huge temperament, dazzling technique and a
heart to match », Evelyne Berezovsky is one of the most sought-after young musicians of today.

Born in Moscow in 1991 Evelyne started playing the piano at the age of 5 and appeared with an
orchestra for the first time at the age of 11 playing Mozart’s Concerto K415. She has studied with
the renowned professors Hamish Milne (London), Elisso Virssaladze (Italy), Rena Shereshevskaya
(Paris) and recently has been working with Maria João Pires in Portugal. Evelyne is a Grand Prix
winner at the Goergy Cziffra International Competition (2019) in Paris, France.